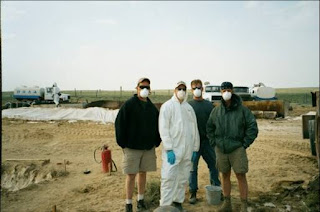 Its 7 May 2010 - I had a great visit from my friend Ben several days ago...you may remember he was one of the individuals who I wrote of previously and was with us in 2002 in Uzbekistan. We had a great dinner and even better conversation about the work we did in removing a massive stockpile of anthrax from a former Soviet Biological Test Facility in the Aral Sea.

Now this was not your average mission…nor was it one that was considered conventional by any means...the US Government had never undertaken a mission of this scope or magnitude before. It was an amalgamation of people, skills and some luck bought together and placed in one of the most remote corners of the world in order to prevent a large stockpile of biological material from falling into the hands of terrorists…and I was fortunate enough to lead it…along with some other very honorable folks!

There were many personalities who had a hand in the success of that operation…and yet what we did...the mission…albeit unclassified…never saw the light of day. It was a testament to how we as Nation conduct those secretive and necessary activities which are of great importance…with little or no fanfare...or any accolades to those involved. It is the nature of the business we lived and worked in.

Our timeline mirrored ongoing missions in Afghanistan including Operation Anaconda…and so while the US Army, Marines and the Air Force were rooting out terrorists in the Tora Bora region of Afghanistan our small cadre of subject matter experts was silently removing the largest known…and unguarded…repository of biological material the world had ever seen.

To place this into context…the amount of biological materials at this site was enough to kill all of the people in the world…several times over! Something needed to be done.

From a Monterey Institute publication regarding what this team did:

"The primary purpose of the expedition was to prevent potential adversaries from acquiring biochemical materials that could pose a significant risk and danger to Uzbekistan and the United States,"

Ben and I had chatted about the dynamics of that operation…the people…the developing personalities…and how what was planned in Washington, DC was not was executed on the ground once we arrived in country. We talked about the helicopters; the broken equipment; the lack of water and the threat we all faced when we undertook this operation. We talked about the meaning of having good people no matter where you are or what you are doing…for that was the measure of success for this mission.

I have captured many photos and memories of this significant mission…talking with Scott Harvey always brings up other memories that I totally forgot…I go into information overload! Ben was also a repository of some great stories as well.

What follows is a synopsis to help readers understand the scope of what we were up against as well as its significance…when people hear about it they are astonished…it makes for a great story…but when they understand the scope of the operation and its significance and meaning to our Nation…they are thankful…thankful for the people who risked their lives and the sacrifices made...in order to preserve our freedom.

What you will read below is written materials put together in an effort to capture the history of the biological program in the former Soviet Union as well as the critical aspects of our operation. It is presented as part of a book that I would have continued authoring in conjunction with another member of our mission...but my time left currently stands in the way of that effort.

I hope you enjoy…and more importantly understand...what we did!

Biological Facility Background:
In the spring of 1988, Russian Biological Scientists located 850 miles east of Moscow were ordered by the Kremlin to undertake their most critical mission to date. Working with unparalleled speed and absolute secrecy, the scientists in the city of Sverdlovsk transferred hundreds of tons of weapons grade anthrax bacteria -- enough to destroy the world many times over -- into giant stainless-steel transport canisters. They haphazardly poured a makeshift bleach compound into the containers in a futile effort to decontaminate the deadly pink powder. They packed the canisters onto a military transport train two dozen cars long and sent the illicit cargo almost a thousand miles across Russia and Kazakhstan and then by air to a remote island in the heart of the inland Aral Sea. Here, Russian soldiers dug cavernous pits and poured the toxic sludge into the ground, attempting to bury the germs and eliminate illicit evidence of any violation of the Biological Weapons Convention.

Vozrozhdeniya Island was a natural choice for this deception based on its remoteness from the rest of the world. Renaissance Island, as it translates from the Russian, had been the Soviet Union's major open-air biological weapons testing facility.
In the period up through 2002, Renaissance Island, which the former Soviet republics of Uzbekistan and Kazakhstan share, was the world's largest anthrax burial ground.

Located in the central Aral Sea, Vozrozhdeniya Island was one of the main laboratories for the Soviet Union’s Microbiological Warfare Group. In 1948, a top-secret Soviet bioweapons laboratory was established there to further advance the Soviets domination in biological warfare. Word of the island's danger was further spread by Soviet defectors, including Ken Alibek, the former head of the Soviet Union's bioweapons program. It was here, according to Alibek (and based on Mr. Hayes’ work) that anthrax, plague and other biological warfare agents were weaponized and stored.

The main town on the island was Kantubek, which lies in ruins today, but once held approximately 1,500 inhabitants including weapons scientists, family members, military personnel and support staff.

The laboratory staff members abandoned the island in late 1991. Many of the 66 gallon containers containing the anthrax spores sent here in 1988 were not properly stored or destroyed and posed a potential proliferation risk if continued to be left unguarded. Word of this secret storage facility began to leak out and action was needed to ensure its identification and physical security.

The Removal of the Biological Threat

In the spring of 1999 Mr. Brian Hayes and a hand picked team were tasked by the Department of Defense to deploy to the former Soviet Union Biological Weapons Testing Facility on Voz Island to confirm a myriad of speculative questioning and to conduct specialized tasks associated with the islands past history including:
1. Identification of key production, research and development facilities on the island and any contamination issues;

3. Identification, marking and testing of reported burial pits purported to contain live weaponized anthrax from Russia sent to this site in 1988 (Author note: The anthrax was hastily transported and subsequently buried on the island in 1988 after Soviet leader Mikhail Gorbachev decided that the discovery of a stockpile of anthrax in eastern Siberia would be an embarrassment if Western countries ever found it. The West had suspected the Soviet Union was in violation of a 1972 treaty banning biological weapons ever since a 1979 accident at Sverdlovsk, 850 miles east of Moscow, released anthrax spores that reportedly killed some 70 people)

After making an initial technical assessment while on the site the team lead by Mr. Hayes reported back to US officials that the anthrax had been found. Mr. Hayes’s team readied materials for transport back to the US for further diagnosis. After an interagency effort determined that the anthrax lying in the pits was viable and the subsequent risk to the US and its allies was great a mission to eliminate the materials had to be developed and executed. In October, 2001 the Department of Defense made the decision that based on various movements by Al-Queda and other terrorist organizations who were actively seeking biological materials for a “global jihad” against the West planning should commence to eliminate the largest unsecured stockpile of anthrax.

In late 2001 Mr. Hayes was selected by the Department of Defense to lead another specialized team back to the island to ascertain exactly how much anthrax existed at the site, its total lethality and how best to accomplish any future large scale elimination effort. Having assembled a unique team of linguists, military personnel and analysts the team further isolated the site containing the live anthrax as well as took additional samples from several of the major structures at the complex to ensure that no residual contamination remained within. Where contamination was present in these structures, Mr. Hayes destroyed it in an effort to remove any future impediments to launching a large scale pathogen destruction mission.

In January 2002, with little fanfare or public knowledge the Department of Defense authorized the Voz Island Pathogenic Destruction Operation (VIPDO) with Mr. Hayes as the Mission Director. Mr. Hayes selected a second team of specialists including contractors, scientists and linguists to work in conjunction with scientific counterparts from Uzbekistan to eliminate the buried materials.

Initial deployments began in March 2002 to establish a footprint in the former sea-town of Nukus, Uzbekistan in an effort to secure the necessary equipment to execute the perilous task.

The team fully deployed to Voz Island in Aprl 2002 and immediately commenced destruction operations. The accelerated timeline as well as other environmental factors, labor and equipment issues resulted in a myriad of complex destruction methods being scrapped for simpler more cost effective methods designed by Mr. Hayes’ team.

In June, 2002 the VIPDO was completed 2 weeks ahead of schedule. Mr. Hayes reported back to the Government of Uzbekistan and the US Ambassador to the region that the unsecured anthrax had been totally eliminated from this former testing site.

The operation was successful on many fronts…but I think these are the most important:

1. Complete destruction of almost 300 metric tons of live anthrax spores left over from the USSR with zero contamination to the work force or the surrounding environment

2. Removed the largest unsecured proliferation threat in the world whereby ensuring that the material could not be used in a nefarious manner against the US, the Government of Uzbekistan or any of their allies.
Posted by Brian Hayes at 8:32 AM